What can CNN do for you?

Well, today Amy Wilson's essay, Why I didn't want a girl aka A Daughter, At Last (the original title) was posted on CNN.com. Amy's blog has had 10,000 and counting hits, we've had numerous personal emails, she has 19 comments on her blog and over 100 comments on CNN.com in conjunction with the article.

If you are interested in Amy and her writing, see Mother Load this month in Florida:

Posted by Antonio Minino at 11:11 AM No comments:

Polar Bear on the loose in Union Square 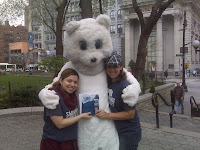 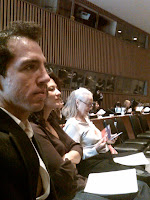 Tickets are $30 and are now available online at www.telecharge.com or by calling (212) 239-6200. Tickets may also be purchased in-person at the Theatre’s Box Office, ½ hour prior to the performance.

Swimming with the Polar Bears is a funny, poignant, and devastatingly personal look at the dangers of global warming. Actor Mel England returns to the autobiographical one-man arena, with director Jill André, to explore the parallels between contemporary life, ancient Eskimo mythology, and the tragic loss of endangered species.

In the tradition of Spaulding Grey, England takes an introspective examination of his battles with extinction – from surviving childhood abuse to overcoming Cancer – as a backdrop for larger questions of how we all can survive on our precious planet. A 20-year AIDS survivor, England struggles against the odds—to understand our own denial, grasp justifications, and ultimately accept responsibility to save oneself.

England takes us on a fantastical journey bringing Polar Bears to life -- with video and images by National Geographic’s Tristan Bayer and original music by Thomas Silcott – and, in the end, we find we are all Swimming with the Polar Bears.
Posted by Katie Rosin / Kampfire PR & Marketing at 10:39 AM No comments:

Have you taken The Oath?

"Whether the current economic downturn is the new Great Depression or not doesn't interest me," says Jacqueline Goldfinger, playwright of The Oath, "as a playwright, I'm broke today, tomorrow, and until I drop dead (after which time I plan on being fabulously wealthy). What really interests me is how pressure forces people to reveal their true selves."

"Like Ofah, Cebe, and Joshua, we are struggling to balance our ideals with a harsh reality from the reemergence of vast tent cities to shootings at immigration centers to the loss of homes and lifetime savings. Along the way, we laugh and cry and fall in love and out again, but the struggle remains and will define us, as individuals and a nation, for generations to come."

Director Cristina Alicea believes, "the beauty and power of the play is that these people want so much to be good and do good -- but they all end up hurting themselves by making questionable choices to get there. And the audience gets to bear witness to each character dealing with the awareness of their own hypocrisy, or in Joshua's case, his lack thereof."

I invite you to "take the oath" with MTWorks world premiere production of The Oath beginning April 23rd through May 10th, at the historic ArcLight Theater (152 W 71st St).

For more information visit www.MTWorks.org
Posted by Antonio Minino at 2:00 PM No comments:

“If you’re a Manhattan parent (or even if you’re not), this is a film you should definitely see—either to learn about the process or to be glad that it’s over and done with!”
- Lana Lange, NYTimes.com City Room Reader Response

To me, applying to nursery school for my eldest child, TJ, was traumatic. Although I was involved greatly in the community (BOCOCA) and TJ was very smart in all his interviews, he did not get into any of the three schools we applied (I now understand should have applied to more and hand-written thank you notes). It is the reason we are now living in Nyack, where I walked into the local Montessori and TJ was accepted on the spot.

Nursery University gives an honest, non-biased look at the process. With grace, it follows five families’ journeys while also offering a behind-the-scenes look at the experts who advise them and the school directors who struggle to determine which “applicants” to allow through their doors.
Posted by Katie Rosin / Kampfire PR & Marketing at 8:37 AM No comments: 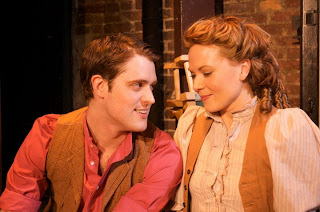 “This production is blessed by its actors in these two central roles. Joy Franz neatly embodies the several sides of Mrs. Warren, while Caralyn Kozlowski is subtly touching as Vivie…”
-Robert Windeler, BackStage

“This is a fairly unusual opportunity to see a top-notch staging with an excellent cast in an intimate setting.”
-Jon Sobel, BlogCritics

Tickets are $18 and are now available online at www.TheatreSource.org or by calling 212-501-4751. Tickets may also be purchased in-person at the Manhattan Theatre Source, 177 MacDougal Street.
For more information about Mrs. Warren’s Profession visit www.BOO-Arts.com.

Posted by Antonio Minino at 2:28 PM No comments:

"While the world looked, yet refused to see, death camps such as the Way to Heaven were the Nazis' deadliest reality show."
–Independent Weekly (American Premiere, January ’09)
Equilicuá Producciones proudly presents the New York premiere of Spain's National Theater Award recipient, Juan Mayorga’s WAY TO HEAVEN, English translation by David Johnston, directed by award-winning Matthew Earnest. Having been produced worldwide including London, Paris, Madrid, and Buenos Aires, the play will be in a three-week limited engagementat Off-Broadway’s Teatro Circulo (64 East 4th Street). Performances begin Thursday, May 7 and continue through Sunday, May 24. Opening Night is Saturday, May 9 (8 p.m.).
WAY TO HEAVEN (Himmelweg) is based on the notorious true story of the Theresienstadt concentration camp, where the Nazis constructed a fake village to fool international inspectors and quell extermination rumors. Juan Mayorga’s startlingly original play begins years after the fact with an account by the Red Cross employee who was there, then leaps backward in time to show the creation and rehearsal of another very unusual play, one in which the Jewish prisoners are assigned roles (Mayor, Boy #1, etc.) and given lines to say to the inspectors. The façade, written by one of the most ironic figures ever to appear on a stage – a witty, cultured, humanistic Nazi Commandant – and the Jewish prisoner selected to play the Mayor, this “play” will ultimately serve its purpose and the inspector will return with a positive review.

Although based on historic events, WAY TO HEAVEN is not documentary theater. It is a universal story about fear to take action, and our ultimate decision to overcome it or live in the apparent comfort it provides

.
“It is an absolutely outstanding piece of writing and not necessarily because it deals (indirectly) with the holocaust, a subject that brings with it an inevitable yet all-too-exploited emotional response, but more for the fact that it pushes the usage of the theatrical medium, through its structure, dialogue and general storytelling, into compelling territory; and thus by doing so it also brings a new angle to the historical content on which it is ‘loosely’ based.”
-- londontheatreblog.co.uk
Starring Mark Farr, Trae Hicks, Shawn Parr, Emily Pote, Samantha Rahn, Francisco Reyes, and Jennifer Vega. Costume and sound design by Patrick Johnson.

How much courage is required to take responsibility for what you see?
Posted by Katie Rosin / Kampfire PR & Marketing at 3:32 PM No comments: