It's theater boiled down to its essence. Sixty Seconds from lights up to lights down. The much-anticipated short-form theatre festival returns for its fourth year in partnership with the red-hot Astoria Performing Arts Center! Curated by Dominic D'Andrea, the program will present over 80 plays – each under sixty seconds- by some of the most exciting emerging and established writers in American Theatre.

Tickets are $18, available online at www.apacny.org or by calling 212-352-3101. Tickets may also be purchased in-person at the Theatre Box Office, 30 minutes prior to the performance.

Directions to the theatre: Take the N or Q Subway to 30th Avenue. Walk down 30th Ave. to Crescent St. (Mount Sinai Hospital is on the corner.) Turn left on Crescent Street, then turn right on 30th Road. The entrance is the second set of red doors on your left.
Posted by Katie Rosin / Kampfire PR & Marketing at 11:40 AM No comments: 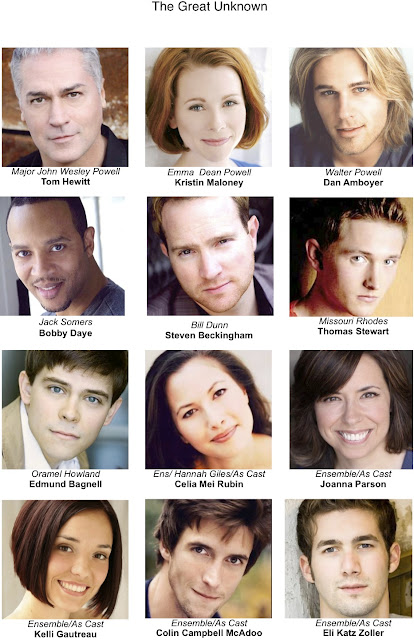 The New York Musical Theatre Festival, Patricia Miller and DiStar Productions/Diana Glazer are pleased to announce the world premiere production of  William Hauptman and Jimm Wann’s THE GREAT UNKNOWN, choreographed by Liza Gennaro and directed by Don Stephenson. THE GREAT UNKNOWN will play a limited engagement at the Theater at St. Clement’s (423 West 46th Street, NYC). Performances begin Tuesday, October 5 and continue through Saturday, October 16.
The Great Unknown is a jubilant Americana musical about big dreams and even bigger risks.
Hoping to inspire and revive a fractured nation, one-armed Civil War veteran John Wesley Powell leads a daring expedition of veterans down the Colorado River to the Grand Canyon, in the spring of 1869. Aware of the physical dangers, Major Powell barely anticipates the emotional and spiritual challenges of the trip, leading back to the War.
The guide of the expedition is Somers, who escaped from slavery and embraced the new world of the West.  Major Powell’s wife Emma Dean, a noted environmentalist of the day, is present in the minds and hearts of both Major Powell and his brother Walter, a survivor of Andersonville prison; as they are in hers.
With a contemporary folk/musical theatre score enhanced by environmental elements, The Great Unknown is an American musical adventure.
The production stars Tom Hewitt (Broadway: title role in Dracula, The Musical; Frank ‘N’ Furter in The Rocky Horror Show (Tony, Drama Desk nominations), The Boys From Syracuse, Scar in The Lion King, The Sisters Rosenzweig) as Powell, Dan Amboyer (Play About the Naked Guy) as his brother Walter, Kristin Maloney (NYMF Alum War Brides and Liberty Smith) as his wife Emma and Bobby Daye (Broadway: Shrek, The Color Purple, The Lion King, and Smokey Joe’s Café) as Somers.
The production features scenic/props design by Edward K. Ross, costume design by Martin T. Lopez, and lighting design by Christopher E. Edwards. The sound designer is Daryl Bornstein.
Ritt Henn (Associate Music Director) will lead an onstage band of musicians composed of Liz Queler, Spiff Wiegand and Robin Daniels.
The Great Unknown plays the following schedule:
Tuesday, Oct 5th, 2010 at 8:00 pm
Wednesday, Oct 6th, 2010 at 1:00 pm
Sunday, Oct 10th, 2010 at 3:00 pm
Wednesday, Oct 13th, 2010 at 5:00 pm
Friday, Oct 15th, 2010 at 9:00 pm
Saturday, Oct 16th, 2010 at 1:00 pm
Tickets are $20 and are available online at http://www.nymf.org/show-1393.html
Running Time: 95 minutes
Website: www.greatunknownmusical.com
Posted by Katie Rosin / Kampfire PR & Marketing at 8:39 PM No comments: