Too Much Light Makes The Baby Go Blind: 30 Poems In 60 Minutes 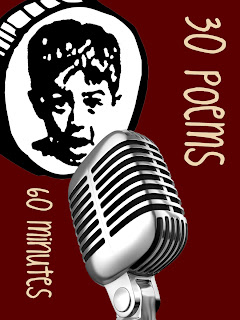 A poetry-themed version of their critically acclaimed signature show, Too Much Light Makes The Baby Go Blind, this ever-changing, lightening-paced performance of 30 Poems In 60 Minutes will be dedicated to theater that is poetic, musical, lyrical, powerful and that sometimes...rhymes.

In Honor of Poem in Your Pocket Day on April 27th, the Neos will be extending their "poetic footprint" by creating a series of wild postings throughout New York City honoring poems past, present, and Neo-future.

For more information on these events and 30 Poems in 60 Minutes, visit www.nyneofuturists.org

THE NEW YORK NEO-FUTURISTS are an ensemble of dynamic writer/performer/directors who present the critically acclaimed, energetic show of original short plays, Too Much Light Makes the Baby Go Blind--a non-illusory collage of the comic and tragic, the political and personal, the visceral and experimental, while embracing chance, change, and chaos.  Developing out of the format that has been a success in Chicago since 1988, the New York Neo-Futurists have roots in NYC from the mid 90’s.  Since opening TML in New York, they have created over 1900 plays and continue to present new and vital work every weekend in the East Village.

A twist on "The Maids"

The Curious Frog Theatre Company's production of Jean Genet's The Maids, directed by Tracy Cameron Francis, will be performed Thursday, April 22nd through Saturday May 8th at a Loft in Chelsea: 306 8th Avenue between West 25 & 26th St in Chelsea is conveniently located across the street from the C and E subway station and on the M7 bus route.  Most people are aware of this play with it's subversive maids acting out their independence to their superior "Madame".  This version is done with a twist, on location in a Chelsea loft, with a multi-enthnic cast, and with the character of Madame being played by a man, as Genet intended. 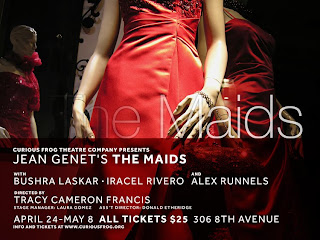 As Jean-Paul Sartre describes in his introduction, “The most extraordinary example of the whirligigs of being and appearance, of the imaginary and the real is to be found in Genet’s The Maids…Two maids both love and hate their mistress.  They have denounced her lover to the police by means of anonymous letters.  Upon learning that he is to be released for lack of proof, they realize their betrayal will be discovered, and they try to murder Madame.  They fail and want to kill themselves.  Finally, one of them takes her life, and the other, left alone and drunk with glory, tries, by the pomp of her posturings and language, to be equal to the magnificent destiny that awaits her.”
The Maids plays the following regular schedule through Saturday, May 8: Wednesdays at 7:30 p.m. | Thursdays at 7:30 p.m.  **Please note April 22 is at 8:30p** | Fridays at 7:30 p.m. | Saturdays at 7:30 p.m. | Sundays at 7:30 p.m.
Tickets are $25 and are now available online at brownpapertickets.com or by calling (347) 410-9840. Tickets may also be purchased in-person at the loft 1⁄2 hour prior to performance.
Wednesday night is only $15 and benefits Clean The World (http://cleantheworld.org/). Audience members should register online and bring soap or shampoo for the charity to receive the ticket discount.
Running Time: 90 minutes
Website: www.curiousfrog.org
Posted by Katie Rosin / Kampfire PR & Marketing at 8:53 PM 1 comment: 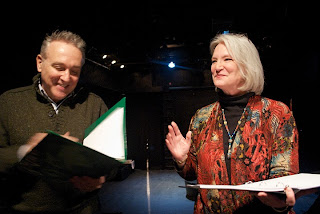 At the same event the PassionFruit Award is presented to member or supporters of the Lesbian, Gay, Bisexual and Transgender Community whose life's work has been devoted, in part, to supporting, developing and celebrating the LGBT Community and the Arts.

For tickets and more information on the award ceremony, visit www.freshfruitfestival.com.
Posted by Antonio Minino at 2:17 PM No comments: