THE LABA THEATRE AT THE 14TH STREET Y

OPENING NIGHT IS SATURDAY, JANUARY 29 AT 8 P.M.
TICKETS ON SALE NOW AT REDFERNTHEATRE.ORG
RED FERN THEATRE COMPANY, Artistic Director, Melanie Moyer Williams, and Artistic Producers, Andrea Day and Kel Haney, are pleased to announce the world premiere production of GENTRIFUSION a series of short plays searching for the truth behind the gentrification of New York. GENTRIFUSION performs in a three-week limited engagement at the LABA Theatre at the 14th Street Y (344 East 14th Street between First and Second Avenues). As per the mission of Red Fern Theatre Company, that each production is paired with a philanthropy whose work relates to the social themes of the play, GENTRIFUSION partnership will be announced. Performances begin Thursday, January 27 and continue through Sunday, February 13. Opening Night is Saturday, January 29 (8 p.m.).
PRESS PERFORMANCES: Friday, January 28 & Saturday January 29 (Press will be accommodated at all future performances.)
In GENTRIFUSION, playwrights Carla Ching, Joshua Conkel, Michael John Garcés, Jon Kern, Janine Nabers and Crystal Skillman, explore the different truths surrounding the gentrification of New York’s neighborhoods. The playwrights were charged with breaking down the cliched idea of "gentrification".  Their pieces dig deeper to address the ways that change both improves and diminishes a community.  All residents are given voice in this series, ultimately discovering that both long time residents and the new crop of gentrifiers benefit and suffer in different measures and different ways.
Directors include John Giameptro, Colette Robert, and Moritz von Stuelpnagel
The production features scenic and costume design by Katherine Akiko Day and lighting design by Marie Yokoyama. Michal V. Mendelson is the production stage manager and and projections have been created by photojournalist and documentary filmmaker, Dennis Ho (http://dwho.com/images.html).
GENTRIFUSION plays the following schedule through Sunday, February 13:
Thursdays at 8 p.m.
Fridays at 8 p.m.
Saturdays at 8 p.m.
Sundays at 3 p.m.  (Super Bowl Sunday, February 6 at 2pm)
Additional performance on Monday, February 7 at 7pm.
Tickets are $25 and are now available online at www.theatermania.com or by calling 866.811.4111. Tickets may also be purchased in-person at the theater box office ½ hour prior to the performance.
Running Time: 120 minutes (with intermission)
Website: www.redferntheatre.org
Location:                                 LABA Theatre at the 14th Street Y
344 East 14th Street between First and Second Avenues
4/5/6/N/R/Q to Union Square; L to First Avenue
This program is supported, in part, by public funds from the New York City Department of Cultural Affairs in partnership with the City Council.
Our 2010-2011 Season is also made possible with public funds from the New York State Council on the Arts, a State agency.
The Dramatist Guild Fund, The Josephine Foundation, and The Puffin Foundation, Ltd, have also made generous grants to make the 2010-2011 Season possible.
BIOGRAPHIES
THE RED FERN THEATRE COMPANY (RFTC), founded in March 2006, strives to provoke social awareness and change through its theatrical productions and outreach.  Each play produced by the Red Fern Theatre Company addresses social issues that range in scope from local to global.  Each production is paired with a philanthropy whose work relates to the social themes of the play.  We educate our audience on the philanthropy’s mission, and a portion of the ticket sales from each play produced is donated to the designated philanthropy. By forming this association, RFTC is able to respond directly to the people affected by the issues addressed in the play.  To date, Red Fern has produced the revivals of ten plays, one New York premiere, and the World premiere of a commissioned collection of short plays.  The RFTC is a 501(c)(3) organization.  All donations are tax exempt to the fullest extent of the law.  Please visit us at www.redferntheatre.org.
Posted by Antonio Minino at 11:49 AM No comments: 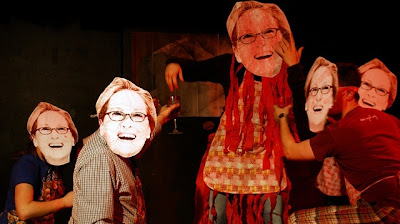 THE NEW YORK NEO-FUTURISTS are an ensemble of dynamic writer/performer/directors who present the critically acclaimed, energetic show of original short plays, Too Much Light Makes the Baby Go Blind--a non-illusory collage of the comic and tragic, the political and personal, the visceral and experimental, while embracing chance, change, and chaos.  Developing out of the format that has been a success in Chicago since 1988, the New York Neo-Futurists have roots in NYC from the mid 90’s.  Since opening TML in New York, they have created over 2000 plays and continue to present new and vital work every weekend in the East Village. For more info: www.nynf.org
Posted by Antonio Minino at 1:34 PM No comments: