MTWorks presents the first play in The Galveston Cycle

"Under the guidance of director Cristina Alicea, each of the actors seems to have understood the depth of the exceptional material, and showcases these characters to their full, sometimes frightening potential."- OffOffOnline.com for The Oath

BARRIER ISLAND
The first play in The Galveston Cycle 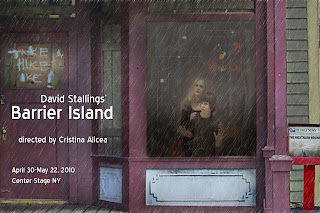 ***
“It is true that living on a potential disaster spot has tended to develop in its citizens a philosophy which is at the same time nonchalant, fatalistic, imperturbable, stoic and with a sort of paternalistic pride in the blows that nature can give and that 30 miles of sand bar can take…” (Prominent Galvestonian).

Barrier Island tackles the nature of a fearless community that chooses to stake their lives on the strength of the historic Galveston seawall -- built to protect the island from natural disasters -- as they await the arrival of one of the most devastating hurricanes to hit the United States since Katrina, Hurricane Ike. Nominated for the 2009 Weissberger Award (Williamstown Theatre Festival), Barrier Island is the first play in “The Galveston Cycle.”
***
The production features Alex Bond* (Flamingo Court), David L. Carson* (Nixon’s Nixon), Anthony Crep, Mark Emerson*, Anne Clare Gibbons-Brown, Carol Hickey* (Golden Boy of the Blue Ridge; Original cast of Urinetown), Stu Richel* (Mortal Decisions: a diary of the Donner Party) Frankie Seratch and Jennifer Laine Williams*.

***
Tickets are $18 ($15 Students/Seniors/Texans with valid I.D.). Advance tickets can be purchased online at www.theatermania.com, or by calling 212-352-3101. Tickets may be purchased at the theatre’s box office half hour before the performance.

**Running time: 2 hours including one intermission**

Barrier Island is made possible in part with public funds from the Manhattan Community Arts Fund, supported by the New York City Department of Cultural Affairs and administered by Lower Manhattan Cultural Council.


THE GALVESTON CYCLE is a three play series written by award-winning playwright and Galveston native David Stallings that take place in Galveston Island before and after Hurricane Ike.  BARRIER ISLAND tackles a fearless community that rests their lives against the historic wall that protects the Island from natural disasters, and the young generation that challenges the emotional disasters no wall can protect, before the arrival of Hurricane Ike. A SONG FOR ST. MICHAEL’S, where a schoolboy's death stirs the people of the Island, soon after the devastation of Hurricane Ike. THE SEAWALL, where three single mothers must come to terms with an absent father, two years after Hurricane Ike, and one year after a National economic crash.
Posted by Antonio Minino at 11:41 AM No comments:

BOO-Arts presents the New York Premiere of THE LOVE LIST

"Norm Foster creates characters who are so believable that theatergoers see bits of themselves reflected on stage."--L.A. Daily News
"This is such a strong, fully realized production... it's a little shocking to realize it's performed in a 50-seat theatre near Washington Square Park. --EDGE New York (BOO-Arts production of Mrs. Warren's Profession).
BOO-Arts
Proudly Presents

THE LOVE LIST
Be careful what you wish for!

TICKETS NOW ON SALE AT WWW.THEATRESOURCE.ORG

Press are cordially invited Thursday, April 29th at 7:00 p.m.; Friday,
April 30th at 8:00 pm & Saturday, May 1st at 8:00 p.m.
(Unofficial press dates will be accommodated, upon request.)
Two men concoct a list of the attributes of the ideal woman - the "top ten" best qualities in a mate. When this allegedly 'Ideal Woman' actually arrives on the scene the men quickly learn that their list could use a few revisions. This hilarious and thought-provoking play examines the quest for perfection, in its long awaited New York premiere.
***
The production features Jarel Davidow* ('Taking a Chance on America: Bela Lugosi's Ellis Island Story'), Kate Goehring* (Angels in America [Los Angeles Pride Award, Carbonell Award]), and Jake Hart* (Bury The Dead [Drama Desk Nom.]).

***
THE LOVE LIST plays the following schedule through Saturday, May 15th:

Tickets are $18.00. Advance tickets can be purchased online at www.theatresource.org, or by calling 212-352-3101. Tickets may be purchased at the theatre's box office half hour before the performance.

Running time: 2 hours, with one intermission.

THE FROG & PEACH THEATRE CO. is pleased to announce their production of William Shakespeare’s MACBETH, directed by Lynnea Benson. MACBETH will play a four-week limited engagement at The West End Theatre (The Church of St. Paul & St. Andrew, 263 West 86th Street, 2nd Fl. --wheelchair accessible). Performances begin Thursday, April 15 and continue through to Sunday, May 9. Opening Night is Saturday, April 17 (7:30 p.m.). MACBETH will be featured in rep with the children’s show Tinkerbell Theatre, which returns April 17th on Saturday and Sundays at 10:30 am and 11:45 am.

Lord & Lady Macbeth are very much in love-- the envy of the Scottish nobility. He’s an extraordinary warrior who’s tough, witty, and honorable.  She’s his lovely, charming, soul mate who wants what’s best for him.  MACBETH is the story of how they lose their souls, in haunting, blood-spattered detail.
Fueled by ambition, Macbeth performs unspeakable acts when three strange and beautiful Witches appear with promises of greatness.  One murder leads to another; and another, and still more in this shockingly modern tale of brutality, eroticism, and the supernatural.
Starring MOTI MARGOLIN & KAITLIN LARGE, MACBETH is one of Shakespeare’s most popular tragedies, and FROG & PEACH delivers the goods with all the excitement, humor and grown-up fun audiences have come to expect.
The production features scenic and lighting design by Jak Prince and costume design by Laura Taber Bacon. Ian Marshall is the fight choreographer, Jenna Lazar is the production stage manager and Alexandra H. Rubin is assistant director.
MACBETH plays the following regular schedule through Sunday, May 9:
Thursdays at 7:30 p.m. | Fridays at 7:30 p.m. | Saturdays at 7:30p.m. | Sundays at 3 p.m.
Sunday Matinees are followed by an informal talk-back with cast and Artistic Director.
Tickets are $18 and are now available online at www.smarttix.com or by calling (212) 868-4444. Tickets may also be purchased in-person at the theater ½ hour prior to the performance.
Running Time: 2 hours 20 minutes.
Website: www.frogandpeachtheatre.org
* Macbeth contains brief nudity and portrays acts of extreme violence.
Posted by Katie Rosin / Kampfire PR & Marketing at 8:23 AM No comments:

She Like Girls Ladies at the GLAAD Awards after winning!

The applications for the 2010 Honorary Awards are available online and are due by 6pm on May 1, 2010.

The Honorary Awards Committee is comprised of people deeply grounded in the Off-Off-Broadway community. This year, the committee welcomes two new members; performance artist, Desiree Burch and publicist, Katie Rosin. A complete list of committee members is available on the IT Awards website at: www.nyitawards.com/aboutus/hac.asp.

?I am thrilled to be Co-Chairing the Honorary Awards Committee this season,? said Abby Marcus. ?As a past honorary award recipient - my company, Vampire Cowboys, was awarded the Caffe Cino Fellowship in 2006 - I know firsthand how meaningful and special these awards are to the OOB community. I look forward to helping the New York Innovative Theatre Awards continue their good work in providing recognition and honor to companies and artists working in Off-Off-Broadway.?

Over the past six years, the IT Awards have honored over 600 of the brightest and most influential artists from the Off-Off-Broadway community.

The Honorary Awards are:
* The Artistic Achievement Award, presented to an individual who has made a significant artistic contribution to the Off-Off-Broadway community;

?It is a great honor to be thought of in the same breath as Caffe Cino, the birthplace of Off-Off-Broadway. Much in the same way that Joe Cino?s legendary coffeehouse became an accidental theater hub, The Brick quickly became something more than we planned. Now we?ve grown into a busy theater community, with year-round plays, festivals, late-night events and we?ve hosted hundreds of theater artists in the seven years since our founding. We?re very excited that the IT Awards recognized and supports our commitment to keep at it.? -- Michael Gardner, The Brick Theater, Inc.


Ben Hodges (Co-Chair of the Honorary Awards Committee) is editor in chief of the Special Tony Honor Award?winning Theatre World, which, at sixty-six years of age, is the most complete annual pictorial and statistical record of the American theatre, including Broadway, Off-Broadway, Off-Off-Broadway, and regional theatre productions. Ben served as executive producer of the Theatre World Awards for Outstanding Broadway and Off-Broadway Debuts from 2002-2007 and was presented with a 2003 Special Theatre World Award in recognition of his ongoing stewardship of the event. Ben has also served as executive producer LAMBDA Literary Foundation ?Lammy? Awards, given for excellence in LGBT publishing. His independent theatrical publications include The American Theatre Wing Presents: The Play That Changed My Life: America?s Foremost Playwrights on the Plays That Influenced Them, The Commercial Theater Institute Guide to Producing Plays and Musicals, Forbidden Acts: Pioneering Gay and Lesbian Plays from the Twentieth Century, and Outplays: Pioneering Gay and Lesbian Plays from the Twentieth Century.

Abby Marcus (Co-Chair of the Honorary Awards Committee) has worked as a Stage Manager and Administrator with The Hangar Theatre in Ithaca, NY; Westport Country Playhouse in Westport, CT; The Shakespeare Theatre in Washington, DC; The Town Hall in New York; Nosedive Productions; Alliance of Resident Theatres/New York; as Company Manager for LAByrinth Theater Company; and as General Manager for HERE Arts Center. Currently, Abby is the Managing Director and Producer for the Caffe Cino Award-winning Vampire Cowboys Theatre Company and Managing Director for The Dramatists Guild of America. Abby received her Bachelor of Arts degree from Ithaca College, and her Master of Arts degree in Performing Arts Administration from New York University.

Desiree Burch (New Honorary Awards Committee Member) Desiree Burch is an NYC-based comedian, emcee, writer, and performer, known for work with the New York Neo-Futurists in Too Much Light Makes the Baby Go Blind and for her acclaimed solo show 52 Man Pickup (four stars from Time Out NY, and The List, UK) which has been featured at Ars Nova, The Ohio Theater, Galapagos Artspace and in the New York (spotlighted by Back Stage) and Edinburgh International Fringe Festivals. One of New York Magazine?s ?10 People that Funny People Find Funny,? Desiree has supplied laughter for MTV, VH1, NBC News, The New York Post, Comedy Central, Huffington Post, Caroline?s, Gotham, Comix and comedy clubs around the country, and in the upcoming feature-length documentary I Heart New York. She previously hosted/curated the reading and variety Smut (?Art that should carry a Parental Advisory Label? ? NY Times) and in 2008, founded The Hysterical Festival for women in comedy.

The New York Innovative Theatre Foundation is a not-for-profit organization recognizing the great work of New York City's Off-Off-Broadway, honoring its artistic heritage, and providing a meeting ground for this extensive and richly varied community. The organization advocates for Off-Off-Broadway and recognizes the unique and essential role it plays in contributing to American and global culture. They believe that publicly recognizing excellence in Off-Off-Broadway will expand audience awareness and foster greater appreciation of the New York theatre experience.

Guess Who's Coming To Dinner! Press checking out "The Soup Show"

Here’s the press that is checking out The New York Neo-Futurists' production of The Soup Show as of Today,


Big Thank You to everyone who has written up, and/or interviewed The Soup Show. Special thanks to,

When will you join us? 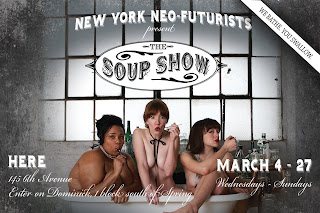 Posted by Antonio Minino at 1:11 PM No comments: