Submissions are now open for the 2010 Festival! Applications available!

Be a part of one of the most prestigious short play festivals in the world!

From the horses mouth

By THE NEW YORK TIMES
Q.
With all the shows that are in the New York City area, including Off and Off Off Broadway, and regional and school productions, how is it determined which ones are reviewed in the Times? Are you ever sent to review something and decide that it isn’t something that should be in the paper and then don’t write about it? — donlincoln2

The theater editor, currently Stephanie Goodman, in consultation with the critics, determines which shows to cover using various criteria, generally related to the prominence of the artists involved and the reputations of the companies. And sometimes downtown buzz lets us know which new companies and unknown (to us) artists to cover. But it’s not an exact science; occasionally a worthy show goes uncovered.

And yes, on a couple of occasions I’ve decided a show I planned to cover is better left unremarked upon. But I’ll name no names here.
Posted by Katie Rosin / Kampfire PR & Marketing at 2:39 PM No comments:

Today we are celebrating!!!  Working Man's Clothes production of She Like Girls was nominated for a GLAAD award!!!

LATE NIGHTS WITH THE BOYS: confessions of a leather bar chanteuse

"[Late Nights With The Boys] is deft, quirky, both neat and messy (on purpose), verbose but succinct, and so very, very colorful. It fairly flows with wit and passion."-
San Francisco Bay Times 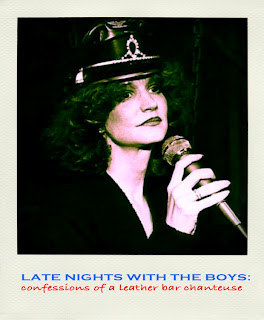 LATE NIGHTS WITH THE BOYS: confessions of a leather bar chanteuse

A novel by
ALEX BOND

TICKETS ON SALE AT SMARTTIX.COM


FRIGID NEW YORK is pleased to present THE LOPSIDED COMPANY reading of LATE NIGHTS WITH THE BOYS: confessions of a leather bar chanteuse by Alex Bond, directed by Steven Yuhasz. LATE NIGHTS WITH THE BOYS will be presented at Under St. Marks (94 Saint Marks Place, between 1st Ave & Ave A). Reading dates are Wednesday, February 24th at 6pm; Saturday, February 27th at 7pm; Monday, March 1st at 9pm; Friday, March 5th at 6pm & Sunday, March 7th at 2:30pm.

Press are cordially invited to all readings.


With delightful and poignant tales of a Southern Songstress and her gay family, Alex Bond and David Carson read selections from Ms. Bond's novel and transport you to Dallas 1977, a magical time before HIV/AIDS, but not before ignorance and prejudice. A favorite at the 2008 San Francisco Fringe and the 2009 Fresh Fruit Festival.
---

A reclusive former Southern debutante/cabaret performer in her sixties, Anna Zander hires Craig Bauer to help her write about the best years of her life. She recounts the tales of singing in the gay leather bars of Dallas (when she looked like a drag queen and sang coloratura!). As she reveals memories, lessons, and losses... the collaboration on the book grows, and so does the friendship between Anna and Craig.

The selections will be read by Alex Bond (Flamingo Court), and David Carson (Nixon's Nixon).

LATE NIGHTS WITH THE BOYS has the following schedule through March 7th:

Tickets are $15.00 ($11 for Students/Seniors/Veterans). Advance tickets can be purchased online at www.Smarttix.com, or by calling 212-868-4444. Tickets may also be purchased at the theatre's box office half hour before the reading.

Mobile apps and the arts: where we are and where we

Here is an interesting article on the use of today's technology and the arts.  ENJOY!

Mobile apps and the arts: where we are and where we’re going