Children of Eden is a critical success!

You will be hard pressed to find a “Children of Eden” more creative and eye- and ear-filling than this Astoria Performing Arts Center production...A large, strong-voiced chorus roams all over, often standing one or two feet from you, allowing you to hear Schwartz’s mellow harmonies up close and unmiked...excellent cast and Tom Wojtunik’s lively direction!  -- Marc Miller, Back Stage
A remarkable and ambitious production... ingenious...extremely talented director, Tom Wojtunik, has assembled another excellent cast and design team! -- Oscar Moore, Talk Entertainment
Any show that needs and asks so little, yet provides so much to both theatre folk and audiences alike, is basically a slam-dunk. And in its handsome and highly respectable mounting, APAC's production gets basically everything right. -- Matthew Murray, BroadwayStars.com
An exquisitely unique theatrical experience that should resonate whether you are a lover of musical theater or not. -- Georgina Young-Ellis
A moving production of one of the best musicals that never made it to Broadway, and at $18, you get far more than you pay for... this is a moving, often beautiful production, one that is appropriately both honest and sincere. - Dan Dinero, Theatre Is Easy
Posted by Katie Rosin / Kampfire PR & Marketing at 2:09 PM 5 comments:

Too Much PRIDE Makes The Baby Go GAY: 30 GAY Plays In 60 STRAIGHT Minutes 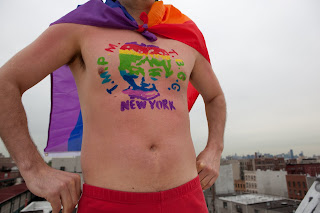 NEW YORK NEO-FUTURISTS are pleased to present their 4th Annual Pride special edition of Too Much Light Makes The Baby Go Blind, this year benefiting LGBTQ advocacy in Uganda. TOO MUCH PRIDE MAKES THE BABY GO GAY: 30 GAY PLAYS IN 60 STRAIGHT MINUTES will be presented at The Kraine Theater (85 East 4th Street, New York, NY 10003) on Friday, June 25th and Saturday, June 26th at 10:30pm.

30 short plays reveal the struggle, the joy, the power of being out and proud in New York City in support of acceptance and freedom for all the world's citizens.

Too Much PRIDE Makes the Baby Go Gay: 30 Gay Plays in 60 Straight Minutes, will be raising money to benefit LGBTQ advocacy in Uganda through the Fund for Global Human Rights, in an effort to combat proposed legislation that could make it a criminal offense to be gay, with punishment by imprisonment and even execution. The New York Neo-Futurists call our audiences to action in support of this important cause.

A blend of the comedic, tragic, political and always personal, the New York Neo-Futurists explore the journey from out to proud in 30 short plays over the course of one hour.

THE NEW YORK NEO-FUTURISTS are an ensemble of dynamic writer/performer/directors who present the critically acclaimed, energetic show of original short plays, Too Much Light Makes the Baby Go Blind--a non-illusory collage of the comic and tragic, the political and personal, the visceral and experimental, while embracing chance, change, and chaos.  Developing out of the format that has been a success in Chicago since 1988, the New York Neo-Futurists have roots in NYC from the mid 90’s.  Since opening TML in New York, they have created over 1900 plays and continue to present new and vital work every weekend in the East Village. For more info: www.nynf.org 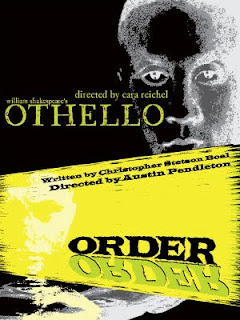 OBERON THEATRE ENSEMBLE is pleased to announce their Rep 2010, celebrating the company’s 14th Repertory Season. Oberon will be presenting OTHELLO by William Shakespeare, directed by Lucille Lortel Award recipient, Cara Reichel, in conjunction with the world premiere of ORDER, by Christopher Stetson Boal (23 Knives, Crazy for the Dog), directed by Tony Award nominee Austin Pendleton (Best Direction of a Play, The Little Foxes).

“It is thrilling how William Shakespeare's Othello, and the world premiere play Order, by Christopher Stetson Boal, explore how our "demons" inside affect how we deal with the critical moments in our lives"– shares Oberon Theatre Ensemble’s Artistic Director Brad Fryman –“We are humbled that Austin Pendleton and Cara Reichel have joined our team to direct for us this season. Together we all hope to make Oberon's Rep 2010 our most remarkable yet, as we strive to present stunningly simple, yet elegant, transformative theatre.”

The esteemed General Othello promotes Cassio instead of Iago fueling Iago’s jealousy. Iago, in turn, plans his revenge in incredibly malicious ways, causing suspicion amongst lovers and friends. The results are tragic as suspicion grows, trust is lost and Othello is compelled to take action against his lovely wife whom he believes to be unfaithful.

The music of Vivaldi and the rhythm of the djembe interweave with Shakespeare's elegant language in this tragic masterpiece.  As characters dance through the Bard's most intricate and compelling plot, OTHELLO illuminates the fine line between the cerebral and the animal in all of us. This is a visceral telling of Shakespeare’s great tragedy of Envy, Revenge and Damaged Love.

For more information visit: www.OberonTheatre.org
Press photos are available at: http://picasaweb.google.com/kampfirefilms/OberonRep2010#
Posted by Antonio Minino at 8:29 PM No comments:

Congratulations to The Soup Show!

The winners will be announced on the morning of Thursday, May 20th.
Congratulations from Kampfire PR & Marketing.
Posted by Antonio Minino at 1:34 PM 1 comment: