The Pillowman returns to NYC in Astoria 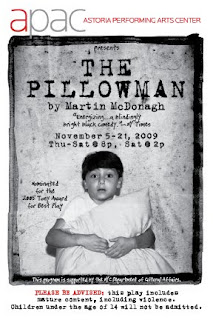 As Taryn Drongowski, Executive Director, states, "We've purposefully chosen a challenging script. Winner the 2004 Olivier Award for Best New Play, the 2004-5 New York Drama Critics' Circle Award for Best New Foreign Play, and two Tony awards for production, The Pillowman is a dark comedy. Why The Pillowman--for us, it’s an opportunity to grow as a theater, and to tell a different kind of story. But for other audience members, The Pillowman will be the most exciting show they’ve ever seen at APAC."

Who: ASTORIA PERFORMING ARTS CENTER
What: THE PILLOWMAN
Written by MARTIN MCDONAGH

Where: THE GOOD SHEPHERD UNITED METHODIST CHURCH
30-44 Crescent St, Astoria, NY 11102. Entrance on 30th Road
Directions to the theatre: Take the N or W Subway to 30th Avenue. Walk down 30th Ave. to Crescent St. (Mount Sinai Hospital is on the corner.) Walk one block South to 30th Road.

Tickets are $15 in advance and $18 at the door. Available online at www.apacny.org or by calling 866-811-4111. Tickets may also be purchased in-person at the Theatre Box Office, 30 minutes prior to showtime.

With echoes of Stoppard, Kafka, and the Brothers Grimm, The Pillowman is a dark comedy about the interrogation of a fiction writer, in an unnamed totalitarian state, whose gruesome short stories have eerie similarities to local horrific child murders. The result is an urgent work of theatrical bravura and an unflinching examination of the very nature and purpose of art.

The production features set design by Stephen K. Dobay, costume design by Emily Morgan DeAngelis, and lighting design TBD. Kristyn R. Smith is the sound designer, Ryan Homsey is the composer, Ryan Kasprzak is the fight director, Ashlee Springer is the props designer, Rebecca Lewis-Whitson is the assistant director, Katie Courtien is the dramaturg and Paul Brewster is the stage manager.